The new tactical shooter Valorant is creating excitement among gamers for a reason. With a roster full of unique characters with different skills, players have a lot of different ways to win a game.

Ten different agents define the strategies of the Closed Beta in Valorant. To make your choice between them easier, we examined the playstyles for each and every one for you.

You can read up on each ability in our overview of VALORANT agents:

VALORANT – All Characters and their Abilities

Burn to Ashes with Phoenix

Let’s start with the fiery agent: Phoenix is an offensive character with high frag potential. Because of his skill „Curveball“ the duelist is able to blind opponents and take them out in an instant. To generate even more map control, the ability „Blaze“ gives Phoenix another advantage to limit the sight of opponents. It even damages the ones who are brave enough to pass the wall. 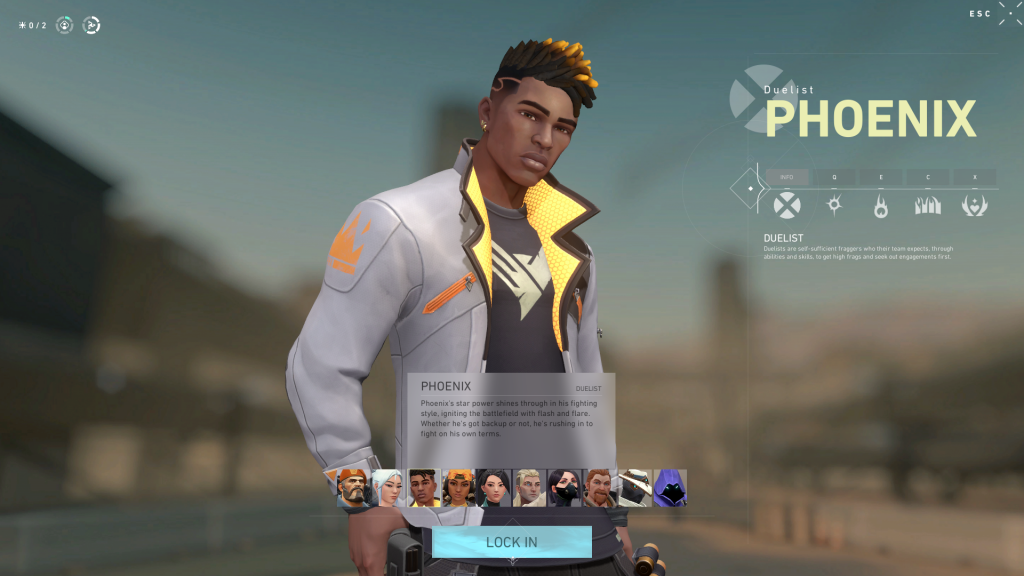 Speaking of zoning, with his signature ability „Hot Hands“, Phoenix can flush out narrow pathways with a fireball that explodes on the ground and creates a damaging radius of fire for mulitple seconds. While enemies take damage in the fire, Phoenix himself heals up. The same goes for his wall. Rise like a phoenix, right?

Further strengthening the aggressive style of Phoenix, his Ultimate „Run it Back“ is one of the best ways to get an entry frag or gather intel. For approximately ten seconds Phoenix can rush in without fearing negative consequences. After the timer expires, Phoenix will return to the point where he activated his Ultimate. If he dies during this time, he returns with full health. His skillset make him a very self-sufficient agent that is very popular among the aggressive-minded players.

Up to this point Sage is without a doubt the best supporter in the game and basically mandatory to any party thanks to her unique skills. The signature ability „Healing Orb“ allows Sage to restore HP of her team-mates and also her own. On top of that the Ultimate „Resurrection“ is capable of reviving a fallen ally. 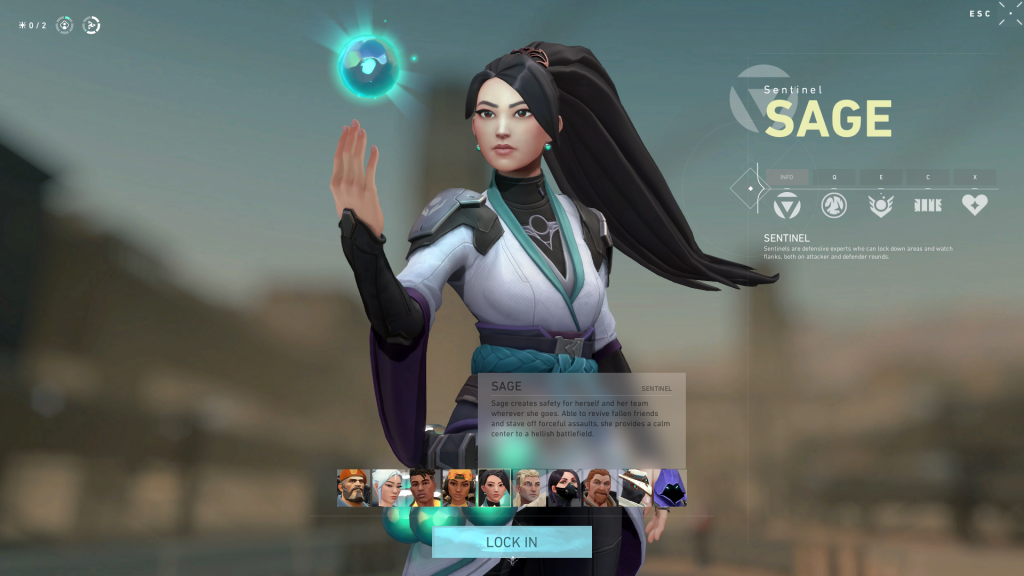 The most common use for Sage belongs to her ability „Barrier Orb“. It creates a wall of solid ice which blocks enemies and shots. Since you can boost yourself on the wall, there are a lot of tactical possibilities to outplay an opponent and raise your game to the next level. Moreover the „Slow Orb“ creates a limited ice field on the map. Everyone walking on this sticky ground will be slowed down and turn into an easy target.

Sage is the ideal choice for tactically minded players that enjoy the ability to support their teammates.

This agent basically is the king of map control. Whoever runs through his “Trapwire” will be revealed. That enemy will even take damage if he walks slowly. In addition the “Spycam” is an extremely helpful tool to scout opponents on basically every part of the map. 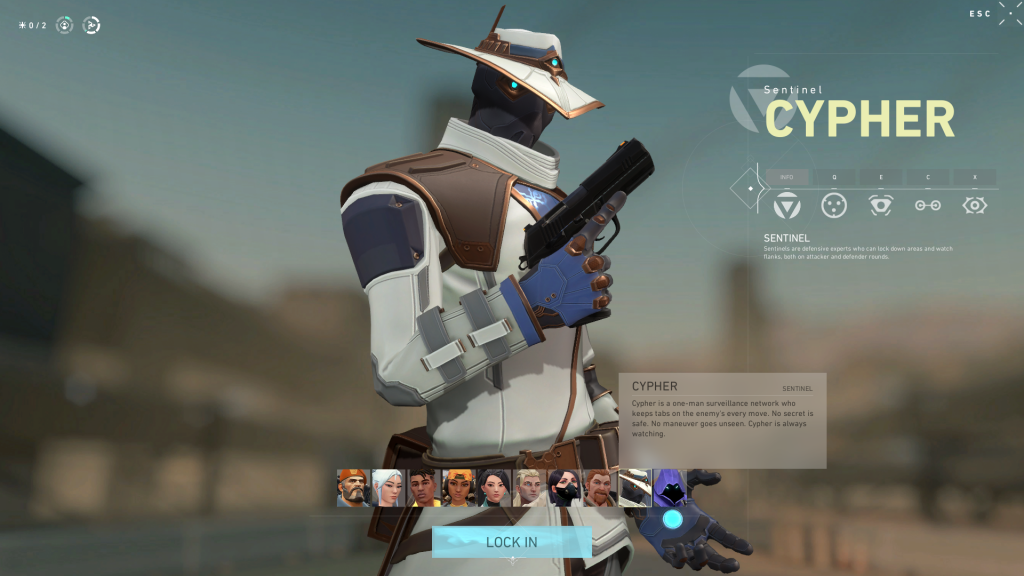 “Cyber Cage” shouldn’t be underestimated because it’s a fitting ability for the Sentinel who can zone enemies out of important spots. And if these options aren’t good enough, his Ultimate “Neural Theft” will reveal every opponent if Cypher targets a dead enemy.

So if you are looking for ways to dominate the map, gather information and surgically strike at your opponents weakspots, Cypher is your agent.

Especially CS:GO players will immediately be familiar with Brimstone even when trying him out for the first time. The tactician’s “Incendiary” works basically like a Molotov in Counter-Strike to zone out opponents from key spots and will deal a big amount of damage to the ones walking into it. His signature ability “Sky Smoke” is a bit different to classic smoke grenades. But the sight-stealing grenades are even better because they drop like nukes from the sky and can be placed even if the player is far away or not in sight. They also last for what feels like eternity. 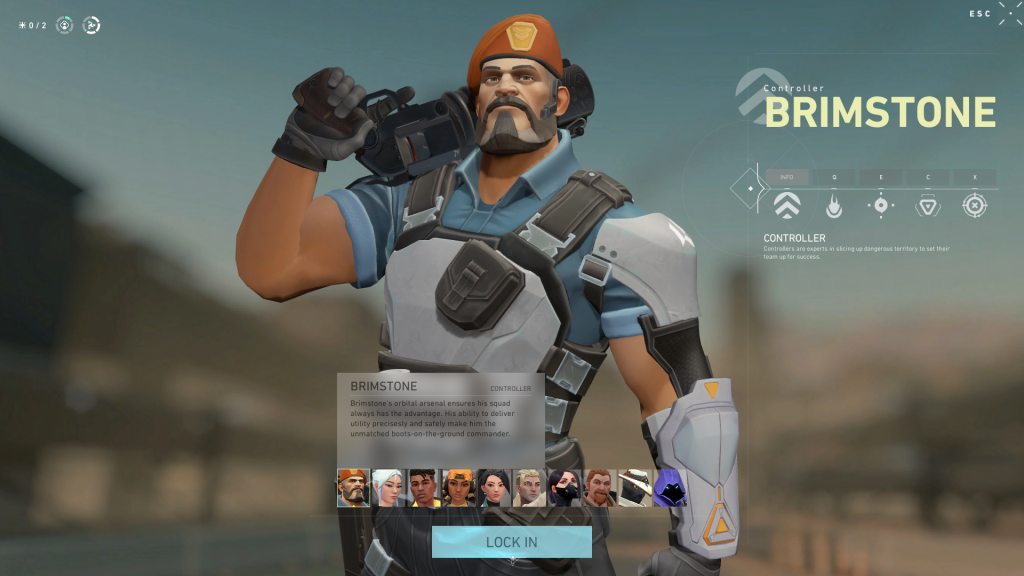 Brimstone’s Ultimate “Orbital Strike” is used in a similar way to the Sky Smoke. But this time, the chosen area will be placed under heavy fire, severely damaging anyone caught in the area of this powerful Ultimate. This ability is very helpful to clear difficult spots or to protect an activated Spike from being defused. However, a bit underwhelming in comparison to that is the “Stim Beacon” which allows all players standing in it to have a Rapid Fire. As it is only useful for players in its direct vicinity it more than often just gives away your position.

Brimstone’s kit make him an ideal choice for CS:GO-veterans trying out VALORANT to feel at home.

Fast and aggressive with Jett

Thanks to her dashes, this agent is the fastest and most mobile of all. Jett doesn’t create just a fresh breeze, her signature ability “Tailwind” propels her forward in the direction she is moving. Moreover, the “Updraft” allows the duelist to elevate into the air quickly to get height advantages or strike from unexpected angles. 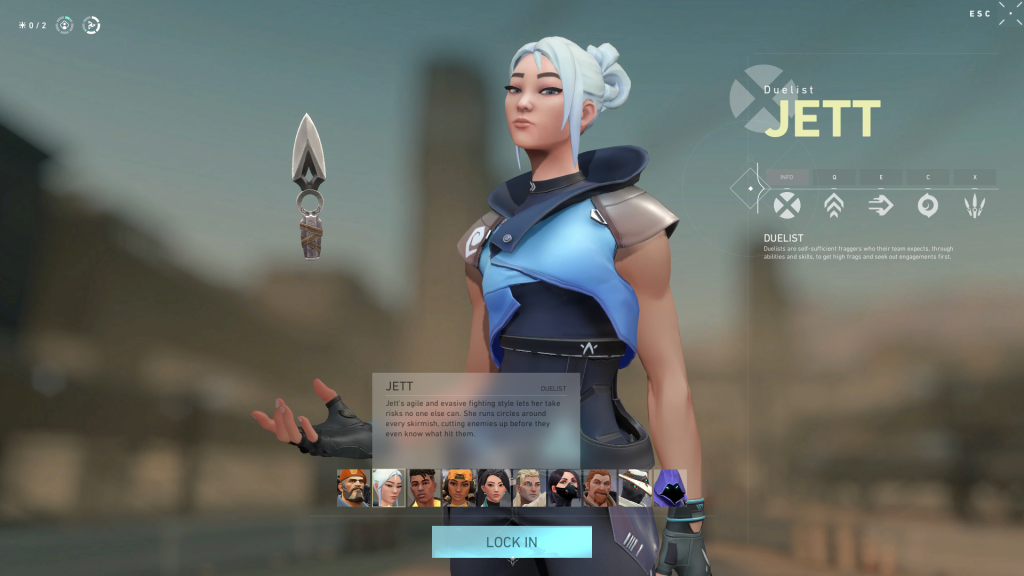 Even though the ability “Cloudburst” will just stay for a very short time, it can be used to limit the sight of the opponent. Although her kit seems basic her ultimate more than makes up for her basic abilities. With “Blade Storm” she adds five knives to her arsenal which can eliminate enemies with a single blow. Upon finishing a target, “Blade Storm” gets new charges.

If you enjoy speeding around the map and outmaneuver your opposition, you will have a blast with Jett.

With plenty of tricks up his sleeves Sova is quite strong an initiator. The archer shoots his “Recon Bolt” to obtain information about the enemies’ locations. The arrow can bounce from walls in a lot of different angles. Furthermore his “Owl Drone” can track down opponents as well as mark them with a dart. Because of these two abilities, Sova is predestined to set up rushes and possible wall bangs. 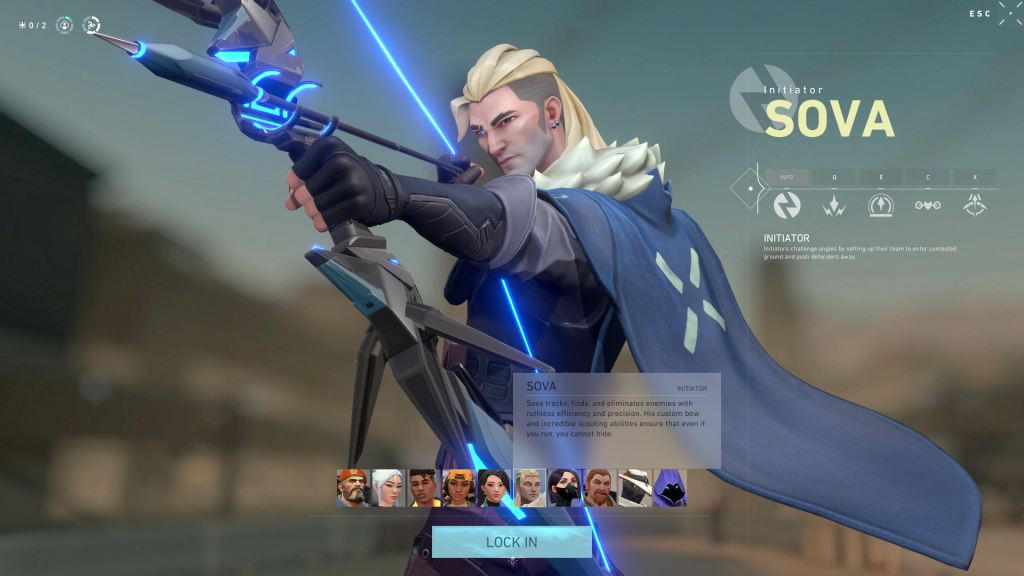 As long as locations are predicted correctly the “Shock Bolt” will do a good amount of damage to enemies in the vicinity. While it most likely will not eliminate enemies on its own it is still great to soften up targets. The Ultimate “Hunter’s Fury” has almost identical issues. Even though up to three arrows can be used to shoot across the map, even passing through walls, it is still very hard to eliminate mobile enemies. While defending a Spike, this ability can truly shine.

Sova offers players an interesting mix of information, map control and damage for a well-balanced all rounder in VALORANT.

Kill counts can literally skyrocket thanks to Raze. This duelant is a bomb expert and has been by far the best offensive agent in Valorant for the very first weeks. Especially the Ultimate “Showstopper” is a force to be reckoned with. The rocketlauncher deals extremely high damage in the area hit and can easily win rounds on its own. 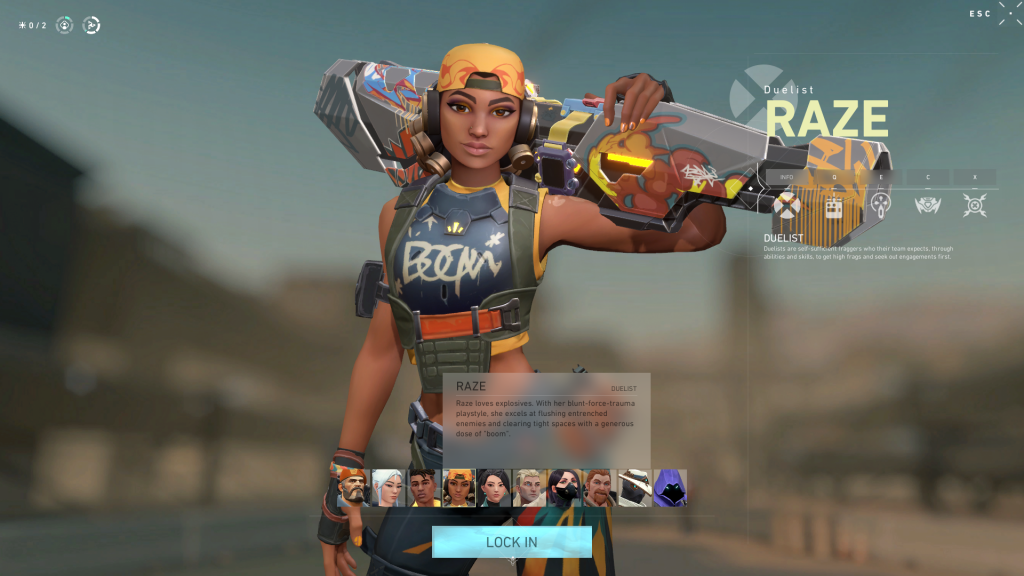 But her diverse kit makes Raze a good option in general. “Paint Shells” are throwable grenades which will explode and create additional small explosions to extend the range. If the grenade detonates in the air, the four sub munitions will fall down like miniature meteorites and explode on the ground. This signature ability is very useful in pretty much all kinds of situations. Initial pushes and retakes can be successful with the flexible grenades. On top of that sneaky plays are possible with the “Blast Pack” which detonates at the thrown surface anytime the player wants it to. You can even boost yourself to higher positions when using it as a jump pack. Additionally, the “Boom Bot” will check areas for enemies and proceed to chase them down if found.

Although Raze has been nerfed slightly, she still is an excellent choice for players. Her versatile kit with lots of damage is strong in almost all situations.

Omen is an agent for special moments. His signature ability “Dark Cover” creates a shadow smoke which can be thrown at a long distance and will last for a quite some time. The player is capable of flanking opponents thanks to his ability “Shrouded Step”. A short teleport from one spot to another that can decide matches, especially when combining it with Sage’s “Barrier Orb” to reach new grounds. 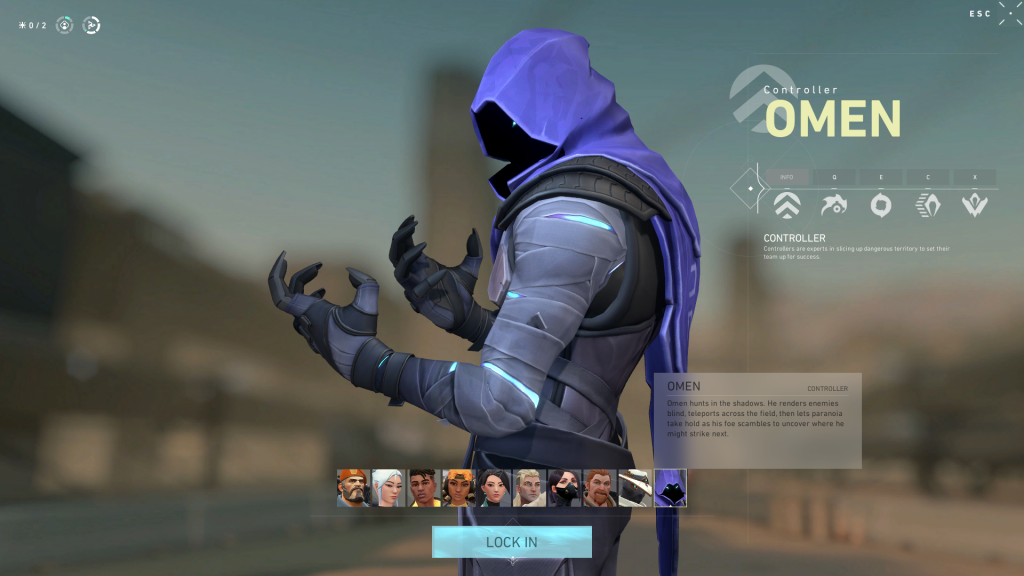 Flashing enemies with “Paranoia” can also be an advantage, but the biggest flank option comes with “From the Shadows”. With his Ultimate, Omen can teleport himself to every location on the map. Therefore, he is able to catch opponents completely off-guard from an already checked angle. A high game sense for the right situation is crucial to let this ability shine the most.

Omen fits players thriving in chaos as he can ambush opponents on the entire map if played well.

Map control and pesky damage are Viper’s trademarks. The player can slow down and damage enemies with “Snake Bite” which will contaminate the surface of the area hit. Along with “Poison Cloud” and her signature ability “Toxic Screen”, she is able to be very annoying for the opposition, limiting their sight and dealing constant damage. 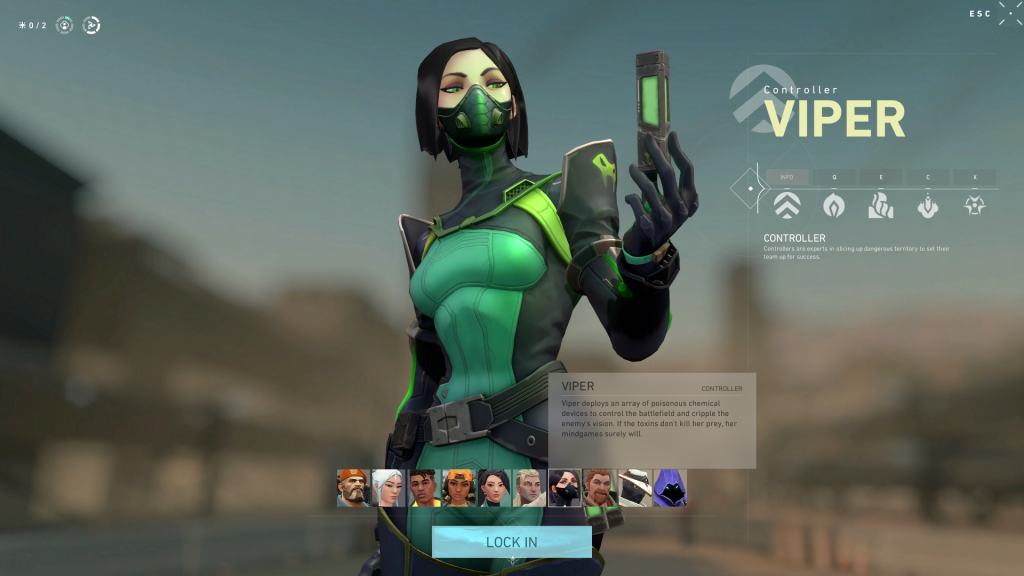 Extremely strong in defending a planted spike is the Ultimate “Viper’s Pit”. This big poison cloud will eliminate everyone else staying in it within a few seconds while also revealing them to Viper. But it can also be used effectively for her to plant the spike because the ability reduces the vision range of every player standing in the cloud.

Similar to Cypher, Viper is a great choice for map control and excells at denying crucial space to the opposition. She does offer slightly less control in exchange for more damage.

Last but not least: Breach is an initiator who can flash opponents with “Flashpoint”. This ability can even be effectively used while firing through a wall. The same goes for “Aftershock”. This blast will damage all agents within its explosive range. 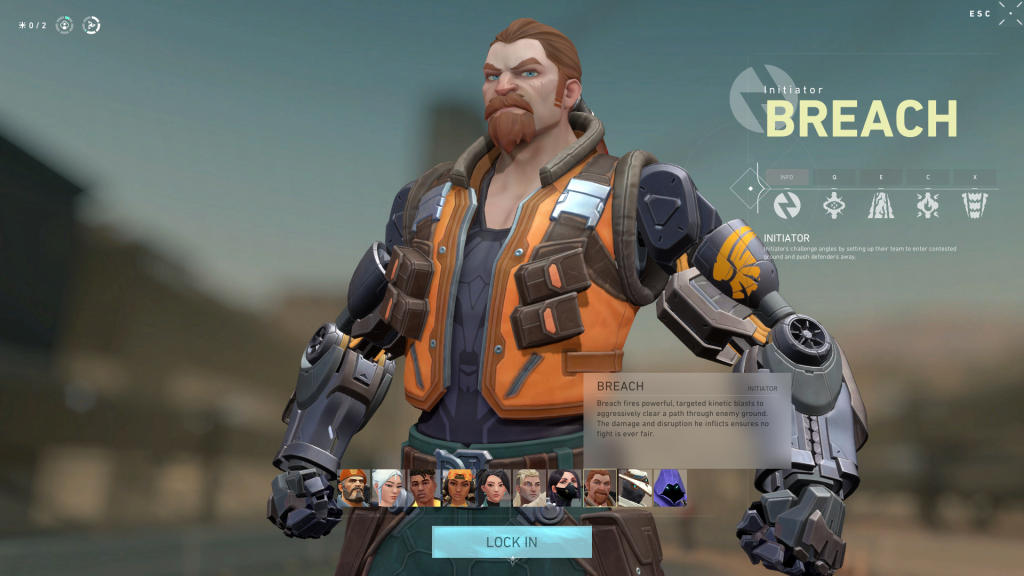 To shake up the scene, Breach will use his signature ability “Fault Line”. A shot in a straight line will create an earthquake and disorient the agents hit by it. The Ultimate “Rolling Thunder” is a wider earthquake and therefore a better version of it. Besides confusing agents, the blast will also knock them up. This ability makes them easy targets to be taken out.

Breach is the ideal choice for entry fraggers as his toolkit is ideal to flush out angles and sow chaos in a bombsite.

Hopefully the choice between the different agents has been made easier for you after this article.