Jian “Uzi” Zi-Hao recently announced his retirement. This ends his 8 year long career which is, arguably, rivaled only by Lee “Faker” Sang-Hyeok. Uzi is only 23 years old but is considered a veteran amongst all players. Eventually his wrist injuries and multiple complications of diabetes forced him to retire. Let’s take a final look at his career and what he achieved.

Uzi’s career started from a young age. Once he turned 15 he joined Royal Club (now known as Royal Never Give Up). It was clear from the start that he was no ordinary player as his mechanical skill was already top tier. He would go on and get second place in the Tencent Games Arena Grand Prix 2012 Winter for his competitive games under the Royal Club banner. Most of the other results throughout his early career were top 5 finishes and although he did not win any trophies, a lot of eyes were fixated on this up-and-coming superstar.

The Season 3 World Championships saw Royal Club as one of the favourites to win. Partly because Uzi was seen by analysts as the most skilled player at the tournament. Adapting to a strategy called “Raise the puppy”, Royal Club build a team comp around Uzi every game. This allowed him a lot of farm and protection to win the game through his insane mechanics. Upon reaching the finals, almost all analysts, casters, and fans predicted Royal Club to win but they would eventually lose to SK Telecom. This haunted Uzi for a long time during his career. He would always barely miss out on a first-place finish in an international tournament, most of the time losing to the powerhouse that was SK Telecom.

Returning to China, Uzi did not waste any time. He trained for days, sometimes even 16 hours per day. He even briefly swapped roles to the mid lane but came back to the bot lane eventually. After a shaky 2014 season he made it back to Worlds where he would be in the finals once more. Hungry for a win, Star Horn Royal Club (as they had renamed) played a strong tournament. They faced powerhouse Samsung Galaxy White in the finals, another Korean team, but would go on to lose. Although being a closer series, it was clear that Samsung was the better team.

Uzi decided that something had to change as he wasn’t able to win a World Championship twice. He would go on to join Chinese powerhouse OMG, one of his rival teams. This move was marked as one of the biggest roster moves in the history of the LPL. For Uzi, it didn’t turn out great. They would not be able to leave a mark on the scene, not even making it to worlds in Season 5. Seeing how other teams competed at the tournament made Uzi even more hungry. He left OMG and joined Qiao Gu Reapers at the end of 2015.

At his new team Uzi had a first international showing at the IEM World Championship. Overall they had a poor tournament, placing 5th/6th in the end. Even though the LPL split started decent they were unable to make a deep run in the playoffs. This really stung for Uzi and as the competitive player he was, he decided to make another change.

Season 6 saw the final roster swap of Uzi as he would join Royal Never Give Up once more and stay there until the very end. Not done yet with his career, he was still very hungry for an international title. By now Uzi was known for being one of the greatest players to never win an international championship. He felt cursed, but not beaten. His mechanical skill was still unrivaled by the marksmen in his region and Uzi had his eyes fixed on the future. After seeing EDward Gaming win the first Mid-Season Invitation (MSI) in 2015 the LPL had hope to once again be the best in the world.

He felt cursed, but not beaten. His mechanical skill was still unrivaled by the marksmen in his region.

Sadly, it did not go according to plan. Royal Never Give Up managed to secure a first place in the regular season but lost the regional finals again to EDward Gaming. This hurt Uzi, but his goal was now to show up at the World Championship which he qualified for. Being drawn in the same group as Samsung Galaxy, Uzi felt the pressure. After they weren’t able to top their group his dream was shattered once SK Telecom was drawn as their opponents in the quarter finals. They would not make it into the Worlds finals that year, being stopped by two Korean teams.

By this time Uzi felt more pressure than ever. Struggling with wrist injuries, he knew that his time was limited to show his prowess as one of the greatest that ever touched the game. This story would repeat itself in Season 7. They again topped their group in the regular season of the LPL and made it to the finals just to lose it to Team WE. They once again got placed in a group with Samsung Galaxy at Worlds, who would eventually win the whole tournament. At this time, rumours of Uzi’s retirement first surfaced.

After having faced defeat at the hands of Korean teams one too many times, Uzi was determined to win in season 8. After having a great domestic first split of the LPL,he finally won the regional finals against EDward Gaming. This gave Uzi the opportunity to play in the Mid-Season Invitational which was previously won by a Chinese team. After having trained rookies such as LetMe and Ming, it finally felt like Royal Never Give Up was a real superteam and a contender for an international title once more.

Facing the best teams from Korea, Europe, North American, Vietnam and Taiwan at MSI 2018, RNG topped their group. Only two series kept Uzi from an international title and from redemption. Uzi felt more motivated than ever and his team rallied behind him. Their first opponent was Fnatic, Europe’s best team. They made Fnatic look clueless and stomped them three wins to zero. Finally Uzi made it to a final of an international tournament again. Facing them would be none other than Korea’s finest. A superteam consisting of all the best Korean players at that time. But this time, it was not Samsung Galaxy or SK Telecom. It was Kingzone DragonX. This Korean team showed a less dominant run throughout the tournament and Uzi felt that victory was close. 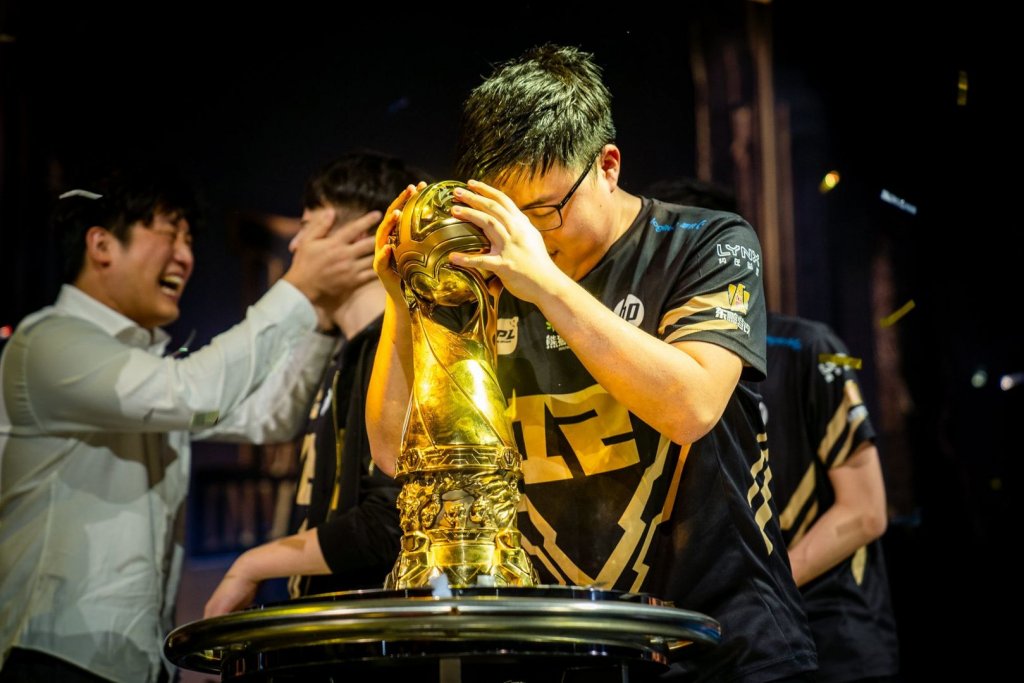 After winning their first game in dominant fashion it looked like RNG were about to win their first international final, but in game two KZ showed why they were Korea’s finest, beating RNG. Uzi felt like everything was on the line. This could be the last chance he has in his career. After winning game three in only 26 minutes, they kept their cool and remained focused. When game four started, they were surprised by some of KingZone’s picks such as Vel’Koz and Illaoi. Uzi and RNG persisted and finally, after being so close his whole career, Uzi finally won an international title. They beat KingZone in the fourth game and were crowned the victors of the 2018 Mid-Season Invitational.

Having just won MSI 2018, RNG was one of the favourites to win Worlds 2018. At the time, China was regarded the best region in the world since Korea lost all their dominance. Topping their group once more, they would face a presumably weak G2 in the quarter finals. Unfortunately for RNG this would mark the beginning of G2’s era, as G2 upset RNG 3-2 and shocked the world, ending RNG’s run at the World Championship.

Coming into season 9 of the competitive League of Legends scene China was regarded as the best region in the world. After a less dominant domestic split RNG still qualified for Worlds 2019. Uzi had been in a lot of pain for the past months due to his injuries, but he was coming to this World Championship with confidence. This time, they were not that lucky in their group. Drawing last years finalist Fnatic and SK Telecom, they felt a lot of pressure.  Only dropping a game to SK Telecom on the first day of groups, RNG was optimistic about their chances. Not being in the best form, they lost to an extremely strong Fnatic on day two. Fnatic also beat SK Telecom, meaning RNG would not make it out of groups this year. This was the lowest that RNG had ever ranked in a World Championship. 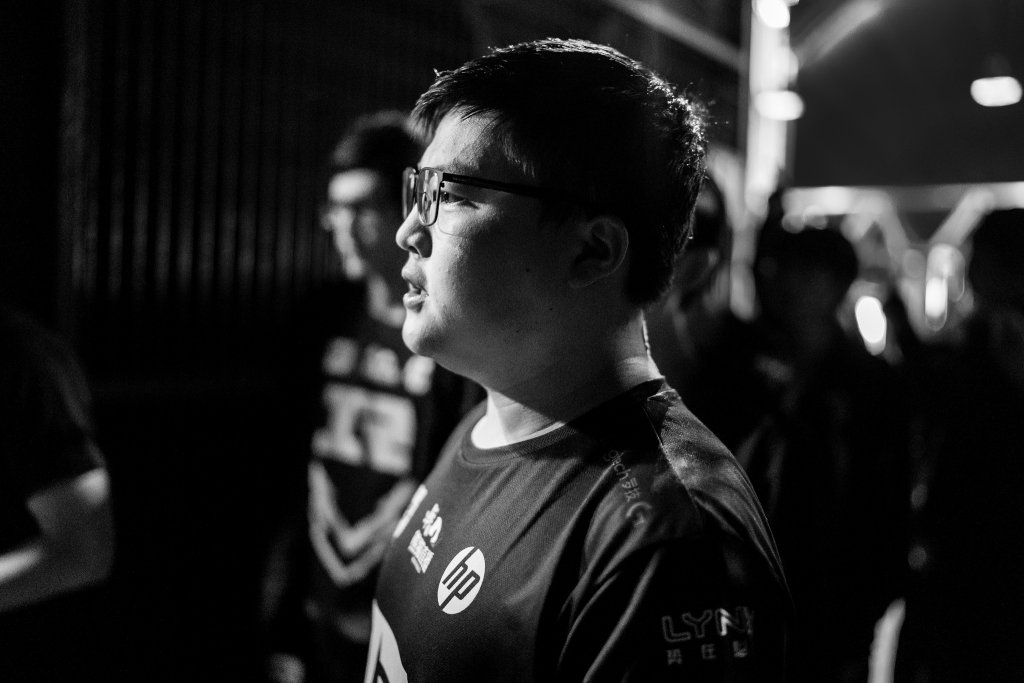 Uzi would not play any more competitive games. He tried to recover from his injuries, but mid-way through 2020 he announced his retirement. His career may have ended on a sour note, but no one can deny how good Uzi was. Having played at the highest level for 8 years straight, he had an extraordinary career. He will forever be remembered as one of the most skilled players to ever touch the game.