Even though the football season may still be recovering from the COVID-19 pandemic, Ultimate Team will be receiving some of its best cards to date with the Ultimate Team of the Season So Far. The new FUT squad should be in packs until June 10, so you’ve got a few days to pack them.

The Ultimate TOTSSFF includes an amazing five cards with a 99 rating, including Kevin De Bruyne, Lionel Messi, Virgil van Dijk, Robert Lewandowski and Cristiano Ronaldo. Among the newly available players the Premier League has been well represented, especially Liverpool with four of their players. The Bundesliga has also received some impressive cards with the addition of TOTSSF Lewandowksi, Sancho, Kimmich and Hummels. 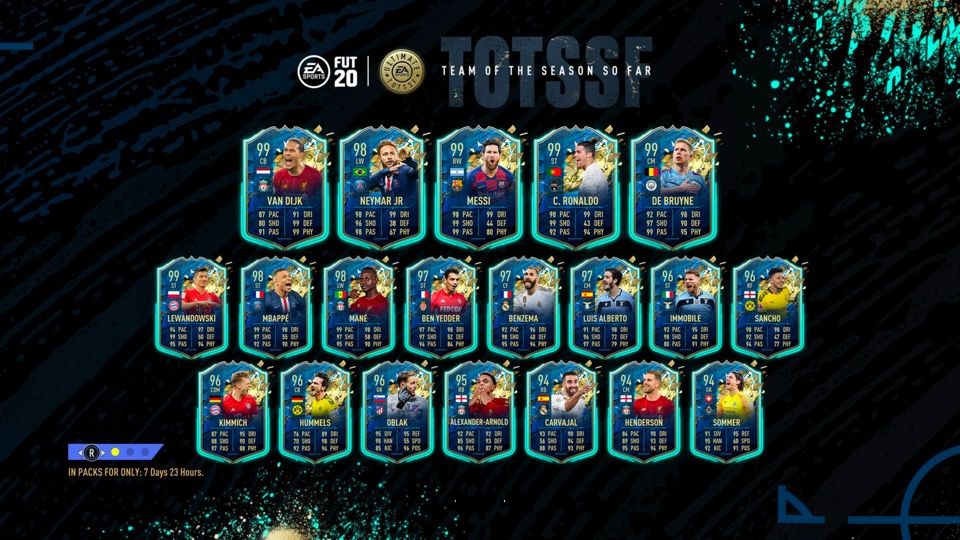 The announcement itself was made in-game rather than on EA’s social media pages, as a teaser for the Ultimate TOTSSF with a countdown clock was put in the loading screen of FUT. The Ultimate TOTSSF is a replacement for the TOTS promo players would normally get, as it’s made a bit more difficult to select players and put together a team thanks to most of the competitions being either shut down or delayed.

This all means that it’ll be sure to be a competitive Weekend League this weekend, as a lot of players will be trying their luck to pick up some of these amazing cards.

Are you excited to try your hand at packing one of these cards or will you be trying to buy them? Join the conversation on Facebook, Twitter, Instagram or Discord.